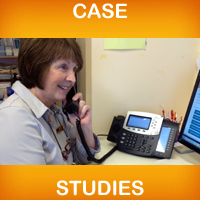 The hospital had not upgraded its IT servers or phone system in years. Consequently, phone calls failed to transfer through and their existing portable phone handsets were frequently out of range as staff moved around the facility tending to patients.

“It was proving very problematic, particularly with the after-hours care services. We were in a situation where the portable handsets just did not work and that proved very difficult and problematic in providing care to our patients,” Jacqui Brown, Neerim’s CEO and Director of Nursing, says.

On the recommendation of their outsourced IT consulting support, Neerim began looking at options to overhaul their telecommunications infrastructure.

Being a rural not-for-profit organisation, capital expenditure capabilities were very limited, prompting Neerim to choose a VoIP-based solution from Comvergence.

Neerim’s nursing staff also needed a better cordless phone system as they were constantly moving around the facility so Comvergence added eight corporate grade mobile handsets, backed up by a Kirk 4000 cordless server and multiple repeaters scattered around the hospital.

“The productivity gains from the new VoIP system are significant.  It has greatly helped our provision of healthcare and also assisted our reception and admin functions in facilitating better support,” Brown explains.

“It has also had a big impact on reducing our call rates. Given the number of calls our staff have to make, the cost-savings are significant, especially for a small not-for-profit organisation. I expect the VoIP set-up will pay for itself within 12 months.”

Being a rural facility unable to completely rely on internet connection and coverage, a total cloud solution was not possible so Neerim hosts two servers on site, remotely managed by Comvergence from Melbourne’s Docklands.

Also, while the hospital now has a pure IP solution for inbound and outbound traffic, Comvergence maintain two PSTN/Analogue lines for emergency.

The actual set-up to provide a high level of uptime to cater for most emergencies was deployed by coupling two DSL connections on one router to improve bandwidth and resiliency.

“The system is 100 per cent remotely managed from our office,” Comvergence Managing Director Brian Michaels explains.

“We also perform a daily back-up in order to make sure we maintain the latest configuration; plus, any additional voicemails or recorded conversations that need to be maintained offsite.”